9 April, 2021
This article has been written and endorsed by la psicóloga Laura Ruiz Mitjana

Do you know what night terrors are? Have you ever had one of them? In this article we tell you what they are and what causes are related to their appearance. 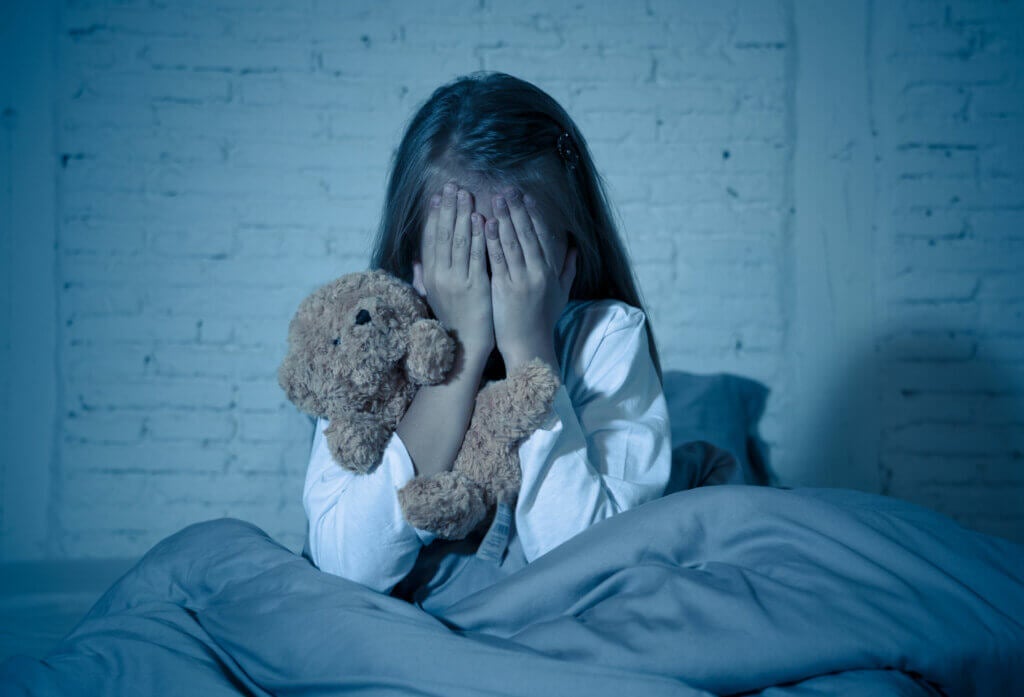 Sleep disorders are very common in society (the most prevalent being insomnia). Some of them occur in childhood, as is the case with night terrors. According to the Spanish Society of Neurology (SEN), between 20 and 48% of the adult population suffers, at some point in their life, difficulties in initiating or maintaining sleep (insomnia).

In at least 10% of cases, this is due to a serious chronic sleep disorder. In relation to children, the American Academy of Pediatrics reports a prevalence of this type of disorder in pediatric age in 20% and 30% of cases.

Night terrors, in particular, can be diagnosed as a disorder in 1-6% of the child population, although the figures increase considerably if we include only specific or even frequent episodes. What does this disorder involve and how is it different from nightmares? Why does it appear, what are its symptoms and how is it treated?

Night terrors: what are they?

Night terrors are a type of sleep disorder called parasomnia. Parasomnias are disorders characterized by abnormal physiological behavior that occurs in some of our sleep phases, or during the transitions between sleep and wakefulness.

Parasomnias are alterations that usually generate discomfort and social or work deterioration. But what are night terrors? They involve recurrent episodes of sudden awakenings, which occur during the first third of the major sleep period, and which begin with a cry of distress.

Complementing this definition, night terrors are crying and screaming episodes that appear suddenly during phases of deep sleep (in the middle of the night).

They are also expressed on the face, through facial expressions of terror and fear. They last between one and ten minutes, according to the International Classification of Diseases (ICD).

It’s a disorder that usually appears in childhood, between 4 and 7 years of age; they can also appear in adulthood, but this is less frequent.

Tiredness, stress, and a brain maladjustment

An imbalance of brain waves during sleep has been found among the possible causes of this sleep disorder, although other factors, such as stress and fatigue, can increase its probability of onset. Later, we will describe the causes and risk factors of this disorder in more detail.

Is it a common disorder?

Regarding its frequency, there is usually one night terror episode per night, but no more. According to the DSM-5 (Diagnostic and Statistical Manual of Mental Disorders), the prevalence of night terrors in children is between 1 and 6% (as a diagnosis), and it’s more frequent in boys.

However, when we talk about more isolated symptoms or episodes (without them being a disorder that interferes with the life of the subject) we find higher figures. In relation to this, a study by the American Academy of Pediatrics states that 4 out of 10 children suffer from night terrors.

In the case of adults, the prevalence is 1% (always when it’s classified as a disorder), and is just as frequent in men and women. In adults, the number of episodes during the night may be higher than in children.

How are they different from nightmares?

Nightmares, another type of parasomnia, are a type of distressing dream. They involve repeated awakenings during the sleep period, triggered by very terrifying and prolonged dreams that leave vivid memories, and whose content usually focuses on threats to one’s survival, safety, or self-esteem. They cause discomfort, just like night terrors.

However, night terrors are less elaborate than nightmares, and the person doesn’t remember the content of the dream when waking up (which is often the case with nightmares). That is, there is a certain amnesia regarding the occurrence and cause.

In this sense, night terrors are much more intense and more distressing, even if the person doesn’t remember them later. On the other hand, episodes of night terrors are usually shorter than nightmares (these consist of long and elaborate dreams, as we already indicated).

During an episode of night terrors, symptoms such as profuse sweating, crying, confusion, and a high heart rate often appear. Symptoms are usually similar in children, adolescents, and adults.

Other symptoms that we find in this disorder are the following:

The exact cause of night terrors is unknown as yet. However, specialists do believe that there are a number of factors that could increase the probability of developing a disorder like this. Among these factors we find:

Regarding the latter cause, according to a study published in 2008 in the journal Pediatrics, childhood night terrors could be inherited.

What is the treatment for night terrors? There’s no specific one, although relaxation and breathing techniques are often used, such as diaphragmatic breathing, Jacobson’s progressive muscle relaxation, meditation, hypnosis, yoga, etc.

A technique called “programmed awakenings” is often used (especially in children). This consists of waking the child every 15-30 minutes before the time which the episode usually appears, in order to “break” the sleep cycle and prevent the event.

In addition, some options that may be useful in order to reduce the stress associated with this disorder are the following:

It doesn’t always have to be treated

It’s important to note here that when night terrors aren’t frequent (and especially during childhood), treatment isn’t necessary. This is because it’s a non-harmful disorder, which doesn’t pose any danger to the child (even if it does cause distress for the parents).

Even so, we would recommend that you take action to prevent any possible damage by closing doors and windows in the case of children who are very agitated and who get out of bed during the episode.

If your child suffers from night terrors and wakes up with extreme fear and anguish, then the best thing you can do is to take them back to bed (if they have got out of bed) and try to reassure them. We recommend that you talk to them slowly, gently, and in a soft voice. Another good option is to put on some soothing music to try to get them back to sleep, etc.

Night terrors can be tackled effectively

As you can see from this article, these events are pretty common and don’t always indicate that there’s any sort of underlying pathology.

The most important thing is to know how to identify them and seek help as soon as possible, in case they start to be a considerable problem that affects the person’s quality of life and that of those around them.